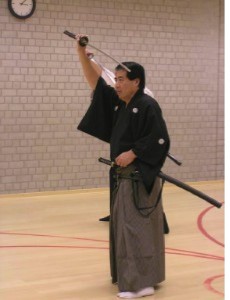 An obvious example of this approach to victory is found in the life of Miyamoto Musashi, probably the most famous swordsman in the history of Japan. He used a phrase “iwao no mi”, implying that one’s body should be like a big boulder, referring to a large boulder seemingly precariously perched on the edge of cliff directly above a mountain path on which he and his disciple Jotaro were walking. Although in truth firmly embedded in the mountain and absolutely immovable, Jotaro was nonetheless fearful that the boulder would come crashing down and crush them. Musashi used this to illustrate a lesson to Jotaro: the key to victory for a warrior is to be like the boulder on the cliff, immovable and containing great hidden power, causing fear in anyone coming near. Musashi believed that the development of such strong technique and spirit that no one would dare attack him was the highest expression of training.
This is certainly one way in which one may train to develop the skill and spirit to dissuade others from confrontation. However, “iwao no mi”, when not tempered by compassion, can lead to an overly aggressive mindset; the foundation of a worldview that is rooted in violence. It is a mindset that often causes one to see enemies everywhere, identifying anyone else as a threat. As the old teaching goes, “with your thoughts, you create your world”. Therefore, if you see someone or think of someone as an enemy, you are certain to cause them to become one. And if you see enemies everywhere, your life will be filled with conflict.
Conversely, if you treat everyone well, you can create conditions that allow for a very peaceful mind. However, the danger here lies in the possibility of being too passive in one’s dealings with others. While a passive mindset and interaction with others may engender feeling of a peaceful mind, that feeling of peace is often illusory. Pacifism without strength is often a recipe for exploitation or domination. An old samurai maxim states that “only a warrior can choose pacifism; all others are condemned to it”.
Unfortunately, we often see budo practiced in a very passive manner. Iai is a common example of this. While an art predicated on the concept of dealing with a sudden attack while the sword is still in the saya, it is often reduced to a mere sword drawing practice for “spiritual” development or aesthetic appreciation. It is often very pretty iai, with seemingly very “friendly” nukitsuke! However, there is absolutely no kihaku, no martial content. The reality is that focusing on “pretty” iai develops nothing.
What we seek in our budo training is the strength and confidence of “iwao no mi” tempered by compassion and wisdom.
A legend surrounding Musashi and the Zen monk Takuan Soho once again serves as a model for this concept. In this story, a venomous snake creeps toward Takuan while he and Musashi are sitting zazen beside a stream. Fearing for Takuan’s safety, Musashi remains absolutely motionless as the snake moves up to Takuan, who merely faintly smiles as the serpent slithers harmlessly over his lap. Upon reaching Musashi, however, the snake recoils in fear and slithers into the brush. While Musashi had not moved, his fierce spirit was palpable to the snake, causing it to flee to the safety of the brush. Musashi, however, recognizing the difference in spirit between himself and Takuan, was both shamed and awakened by this experience. He had trained for so long to cultivate such strong technique and spirit that no one would ever dare attack him. He could defeat an opponent without striking a blow. However, he realized that he was also a man that no one could ever be close to. But in Takuan, Musashi observed the result of equally arduous training, but training that manifested as quiet, calm strength and great peace; a spirit of naturalness that had a far greater power to affect others in a positive way than his own fierce spirit ever could.
This story provides keys concerning the second way that we can train to manifest the concept of “saya no naka no kachi.” What we should strive for in our training waza that reflects properly tempered “iwao no mi” can provide for fertile soil from which truly authentic heijoshin, peaceful mind, can grow. We should most certainly train for strong martial technique, we must develop a feeling of “iwao no mi” in our iai, but we must also be sure to train with the proper heart and spirit. This is what will lead to true strength of spirit, which will in turn manifest as an authentic peaceful mind. This is how we can attain real saya no naka no kachi. This is what we are training for. 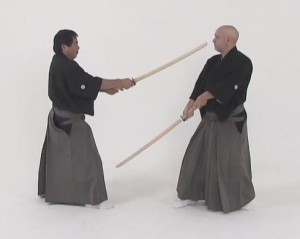 Dedicated to: The Preservation and Dissemination of Traditional Japanese Budo and Bujutsu Sakura Budokan Was Established In 1989, Kingston, Pa 18704. What is a Traditional Martial Art? Traditional martial arts are quite different than the ‘Modern eclectic forms” of sport karate or MMA that have become popularized today. The emphasis in Traditional budo is placed on studying combat tested techniques that were developed by actual warriors of days gone by. The traditions and techniques of the founders of the arts are preserved. Unlike “Modern eclectic forms,” where the techniques … END_OF_DOCUMENT_TOKEN_TO_BE_REPLACED