JKI Focus for 2009: A Deeper Expression of Budo 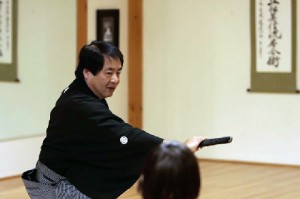 As we draw to the close of one year and look forward to the beginning of the next, I would like to ask that in 2009, all Jikishin-Kai members focus on a deeper understanding of Budo. This focus has two components, namely a greater understanding of etiquette based on sincerity, and, particularly for yudansha, a more advanced practice of waza that reflects a deeper understanding of the meaning or, riai, of the waza. As I have previously discussed, Budo is an effective and deeply meaningful vehicle for the cultivation of morals, respect and etiquette. And while we all understand the significance of etiquette, I want to make sure that, as budoka, indeed, as inheritors of the samurai way, everyone looks deeper into the necessity of etiquette and respect, and cultivates an expression of deeper understanding in their daily lives. Please remember that a teacher and a friend are not, and should not be, the same thing. One may make many friends in life, but a true teacher is a rare find indeed. That teacher may have many qualities that would make him or her a great friend, but to treat him or her as such may cause you to miss the opportunity for a lifetime of guidance. It is up to you to choose what you want. A loyal student must remember to be straightforward with his or her teacher. If one tells his teacher that he can do something within a given time frame, then he has an obligation to meet that deadline. It is not proper to miss that deadline and then tell the teacher that more time is required. It is far better for one to say that one needs one month to do something if that is what one believes is needed. It is also important to remember that one should have the courage to tell one’s teacher that they cannot do something if they truly cannot, rather than saying that they can, and then failing to do so. It is also important to be brave enough to disagree with someone, including one’s teacher if that is truly how one may feel. Additionally, remember that a promise is just that; a promise. Budoka should be like a tiger with regard to promises; they must be committed to follow through. This is the Samurai way. Also remember that etiquette and respect are not the same things. Etiquette refers to proper manners, but it seems that good manners are lacking in our society. Proper etiquette is never superficial, but should be an expression of sincerity, coming from the heart. Regardless of with whom one may interact, one should always treat that person with proper courtesy. This is also the Samurai way.

As I stated, respect is different from etiquette. One should always treat another with proper manners, but one does not necessarily have to respect another person, beyond the general respect for life. Individual respect is something that must be earned and is never something that is given to those who are unworthy, especially those who are care about nothing or no one other than themselves. Certainly, those that commit evil deeds in this world are not deserving of the respect of good people. Remember that one must have respect for life, but that does not mean that one must have respect for each individual that one may encounter in life.

With regard to the subject of respect, it is important to note that the act of bowing is not necessarily an act of respect, but rather an act of appreciation. When one bows to a training partner in the dojo, one is showing appreciation to that partner. However, he may or may not necessarily respect that training partner as a person. Additionally, bowing to the dojo training floor or shomen is an expression of acknowledgement and appreciation that the dojo is a special place, one that is separate from the outside world, and perhaps in a way, somewhat “holy”. With respect to focusing on a deeper understanding of Budo within our physical practice, it is important that our execution of waza becomes a clear expression of our understanding of the waza, bunkai and riai. To illustrate these ideas I will discuss the significance of Okuden waza with respect to such an expression. Okuden waza is distinct from other waza in the Muso Jikiden Eishin-ryu curriculum in that they represent real combat, often against multiple opponents. And in real combat, one slight mistake can mean certain death. This is what makes Okuden waza the most difficult waza to execute with a real expression of understanding. The previous waza, Shoden and Chuden waza, while significant and often seemingly difficult, teach the practitioner how to execute the various components of waza properly and how to move the body efficiently and effectively. In short, they teach toho and body mechanics, preparing one for the deeper study that is Okuden waza. One of the key considerations required to truly understand the waza is to think from the standpoint of uchitachi, the attacker or attackers, when analyzing waza. When you consider the positions and reactions of uchitachi, your waza should not be executed based simply on what the waza “calls for”; they cannot be performed in a mechanical “1, 2, 3, 4” rhythm. Because Okuden waza is real fighting, one’s intent must be directed toward that end, with their waza expressing this understanding. The execution of Okuden waza is not the time for thinking about basic components of toho, such as hasuji. If one is still focusing on hasuji, one really should not be performing Okuden waza. As an expression of real fighting, there can be no mistakes in Okuden waza, for even the slightest error would have resulted in certain death. To gain deeper insight and understanding of Iai, one cannot perform waza in a mechanical or rigid way; one must execute waza in a manner that conveys connection to the enemy and his movement and with an understanding of potential variations in martial encounters. In short, your nukitsuke and kirioroshi must be directed to where your enemy or enemies would really be. In order to really understand this idea, it is essential to think of waza from the standpoint of the uchitachi. Remember to consider that historically, uchitachi or tekki, the enemies that you face when you execute waza, were Samurai as well. As such, they would most likely have been highly trained warriors, possessing many of the attributes and skills that we strive for in our own practice. In short, they would likely have been warriors who expressed kihaku and had sound technique; warriors with an understanding of martial strategy. So, when you try to think from the standpoint of uchitachi, you must view them in this regard, not as some untrained attacker who will merely standstill waiting for you to cut them down. That being said, it is essential that you consider uchitachi’s movement and reactions to your movements so that your technique will have real meaning and therefore express true understanding and real effect. Put succinctly, you must cut to where uchitachi will be as a result of you actions and in relation to your movement. Your execution of waza must express this understanding; the riai of the situation must be clear.

This is also one of the reason for “variations” in the execution of waza. Variation in a given waza is a result of “seeing” different situations; of expressing different bunkai and riai that reflect a difference in a situation. However, while the toho may be slightly different, the waza itself, and therefore the principles that it teaches, is really the same. This is why I do not really think in terms of kaewaza. Kaewaza are “formal” variations in waza. I am talking here about the spontaneous expression of riai as a result of an understanding of the principles that the waza, indeed the entire curriculum, teach.  Editor’s note: Thanks to David Loya of Bakersfield Budo the photographs accompanying this article. 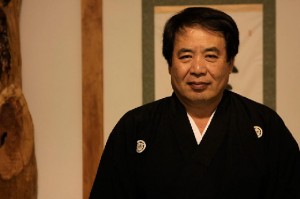 It is for this reason that the headmasters in our lineage, would teach a waza one way and codify it within the densho or present it in books in that same way, while perhaps performing the very same waza differently during an embu. As an example, Oe Sensei, Masaoka Sensei and Miura Sensei have all taught Kasumi with both nukitsuke and the following kirikaeshi executed as yoko ichimonji. However, during embu, the kirikaeshi would likely be executed as an attack to the enemy’s leg, therefore expressing the riai of the situation. When Kasumi is performed this way, is demonstrates that uchitachi leaned slightly backward to avoid the nukitsuke (executed at the level of his eyes), a very likely response in a trained swordsman. However, the lean to avoid the nukitsuke might leave uchitachi’s front leg vulnerable, hence the execution kirikaeshi at the level of his leg. Even kamae is not truly “fixed”, as even slight variations between martial encounters or differences in opponents would likely result in slight changes to kamae, reflecting the riai of the situation. Another important consideration of Okuden waza as “real combat” is the necessity to be able to cut at anytime, to maintain constant pressure on your enemies. When you cut one enemy, your blade must instantly be in position to threaten and cut any subsequent enemies. Even if one should lose his balance in combat (and therefore while executing Okuden waza), there can be no openings in your defenses; one must be able to keep pressure on the enemies; to cut them down despite the situation. As an aside, the natural development and expression of “variation” in waza, through an understanding of changing riai, is one of the elements that separates koryu waza from modern compulsory kata, in which no variation is permitted whatsoever. Another indicator that I frequently see that reveals one’s level of understanding of riai, or one’s realization that advanced Iaijutsu is real combat, is found in one’s metsuke and facial expression. We often speak of enzan no metsuke, or “distant mountain gaze,” however, within waza, enzan no metsuke really exists primarily at the beginning of nukitsuke and as part of zanshin as one move into noto. During waza, as one directs their intention towards and enemy or cuts an enemy, one’s gaze should be focused on the enemy (while still maintaining awareness of other enemies), expressing that reality. Relative to this idea is one’s facial expression during waza. When I observe people executing waza, I often see faces that are calm and expressionless, devoid of kihaku. To me, this reveals a lack of understanding that waza, especially Okuden waza, is combat. Without this understanding, waza is little more than mere performance; a dance. I am not advocating that anyone execute waza with angry or contorted expressions, but rather that one’s expression should convey a degree of intensity that reflects the understanding that waza is an engagement in life and death combat. We have touched on far-ranging topics in this article, but I believe that these subjects are essential to ones growth in Budo. I hope that this discussion has been helpful and enables you to delve deeper into your practice, serves to assist you in your development as a Budoka and enriches your experiences and interaction in everyday life.

Editor’s note: Thanks to David Loya of Bakersfield Budo the photographs accompanying this article.

Dedicated to: The Preservation and Dissemination of Traditional Japanese Budo and Bujutsu Sakura Budokan Was Established In 1989, Kingston, Pa 18704. What is a Traditional Martial Art? Traditional martial arts are quite different than the ‘Modern eclectic forms” of sport karate or MMA that have become popularized today. The emphasis in Traditional budo is placed on studying combat tested techniques that were developed by actual warriors of days gone by. The traditions and techniques of the founders of the arts are preserved. Unlike “Modern eclectic forms,” where the techniques … END_OF_DOCUMENT_TOKEN_TO_BE_REPLACED