Karate-do is a Japanese term which generally translates as “Empty Hand Way.” Although Karate-do is known to be an effective form of self-defense, it is also an equally effective form of mental and physical self-improvement, for adults and children alike. Through regular Karate-do training, the mind and body work together to become a unified force for self-protection. Karate-do training also provides vigorous exercise from which one can improve muscular and cardiovascular development as well as improving balance, coordination and reflexes.

Karate was developed more than 750 years ago on the island of Okinawa by the Okinawan middle class. Based upon natural law (understanding body movement) Shorin Ryu is a complete art that trains both the body and mind.

Chinese martial arts began spreading to Okinawa in the 14th century, but it was not prominent until the 18th century, when Kusanku, a Chinese military official, visited Okinawa and gave a demonstration. In subsequent visits, he started teaching “chuan fa” (meaning “fist way”) to Okinawans

Kanga Sakukawa blended Kusanku’s chuan fa with Tode, the indigenous Okinawan martial art, to form the first martial art style called karate. His student Sokon Matsumura blended Sakukawa’s style with Shaolin kung fu to form Shorin-ryu karate. Matsumura began teaching his unique fighting methods to the bushi of Okinawa and many of the local men. “Bushi” Matsumora, became Anko Itosu’s primary instructor, and both Matsumura and Itosu instructed  Chotoku Kyan,  Choki Motobu, and many of the founders of the Shorin branches that exist today. Several of Kyan’s students would go on to lead their own branches of karate. Among those students were: Shoshin Nagamine (Matsubayashi-ryu), Tatsuo Shimabukuro (Isshin-ryu), Eizo Shimabukuro (Shobayashi-Ryu), Joen Nakazato (Shorinji-ryu), and Zenryo Shimabukuro (Chubu Shorin-ryu).

The Shorin Ryu of Eizo Shimabukuro as taught at Sakura Budokan was brought to the USA in 1962 by one of Shimabukuro’s personal students, John Nash. Our Shorin Ryu at Sakura Budokan reflects the original teachings that were brought back in 1962 as well as the influences of other Okinawan and Japanese teachers that have added to our understanding over the past 50 years.

Students of all belt levels train together to learn the escaping, controlling and defensive arts through the application of kicks, hand strikes, joint locks, throws, and true self-defense techniques. Modern and traditional weaponry (Bo, Sai, Tonfa, Kama and Nunchaku) is also taught. 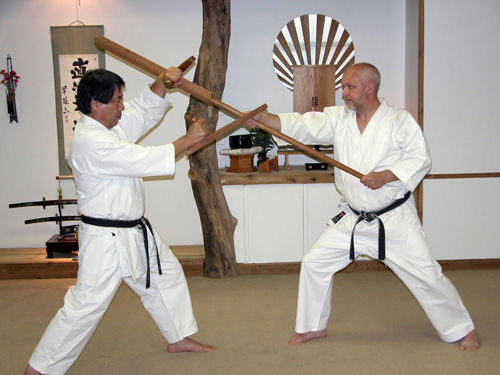 “Only a Warrior can choose pacifism. All others are condemned to it.”

Dedicated to: The Preservation and Dissemination of Traditional Japanese Budo and Bujutsu Sakura Budokan Was Established In 1989, Kingston, Pa 18704. What is a Traditional Martial Art? Traditional martial arts are quite different than the ‘Modern eclectic forms” of sport karate or MMA that have become popularized today. The emphasis in Traditional budo is placed on studying combat tested techniques that were developed by actual warriors of days gone by. The traditions and techniques of the founders of the arts are preserved. Unlike “Modern eclectic forms,” where the techniques … END_OF_DOCUMENT_TOKEN_TO_BE_REPLACED