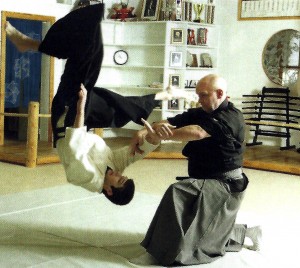 What is Aikido and Aikijujutsu?

Aikido is a modern Japanese martial art developed by Morihei Ueshiba (often referred to by his title ‘O Sensei’ or ‘Great Teacher’) a student of Sogaku Takeda, Soke of Daito Ryu Aikijujutsu. Morihei Ueshiba practiced his art as Daito Ryu and Aiki Budo for many years. His official association with Daito-ryu continued until 1937. However, in those later years, Ueshiba had already begun to distance himself from Takeda and the Daito-ryu. At that time Ueshiba was referring to his martial art as “Aiki Budo.” It is unclear exactly when Ueshiba began using the name “aikido”, but it became the official name of the art in 1942 when the Greater Japan Martial Virtue Society (Dai Nippon Butoku Kai) was engaged in a government sponsored reorganization and centralization of Japanese martial arts. At this time the art of Aikido became uniquely associated with teachings of Morihei Ueshiba.

On a purely physical level it is an art involving some throws and joint locks that are derived from Daito Ryu Aikijujutsu and some throws and other techniques derived from Kenjutsu. Aikido focuses not on punching or kicking opponents, but rather on using their own energy to gain control of them or to throw them away from you. It is not a static art, but places great emphasis on motion and the dynamics of movement.

Aiki-jujutsu is a form that can be broken into three styles: Jujutsu (hard/ soft); Aiki no Jutsu (soft); and Aikijujutsu (soft) which is the combination of the former two. Modern Japanese Jujutsu and Aikido both are styles that originate in Aikijujutsu. It emphasizes “an early neutralization of an attack.” Like other forms of jujutsu, it emphasizes throwing techniques and joint manipulations to effectively control, subdue, or injure an attacker. Of particular importance is the timing of a defensive technique to either blend or neutralize an incoming attack’s effectiveness and use the force of the attacker’s movement against them. Aikijujutsu is characterized by ample use of atemi, or the striking of vital areas, in order to set up jointlocking or throwing tactics.Some of the art’s striking methods employ the swinging of the outstretched arms to create power and to hit with the fists at deceptive angles, as may be observed in techniques such as the atemi that sets up gyaku ude-dori (reverse elbow lock). Many regard one of the unique characteristics of the art to be its preference for controlling a downed attacker’s joints with one’s knee or advanced cramping techniques in order to leave one’s hands free to access one’s weapons or to deal with the threat of other oncoming attackers.

Upon closer examination, most people will find in Aiki related arts what they are looking for, whether it is applicable self-defense technique, spiritual enlightenment, physical health or peace of mind. Aikido emphasizes the moral and spiritual aspects of this art, placing great weight on the development of harmony and peace. “The Way of Harmony of the Spirit” is one way that “Aikido” may be translated into English. Aikijujutsu stresses the combative roots of the modern art. Although different styles emphasize the more spiritual aspects to greater or lesser degrees, all of them are practiced with a spirit of cooperation and respect for ones training partner. The idea of a martial discipline striving for peace and harmony may seem paradoxical, however it is the most basic tenet of the art.

Here at Sakura Budokan we study, research and explore the traditional and modern forms of Aikijujutsu and Aikido through the KNBK and DNBK as well as its original methods.

Dedicated to: The Preservation and Dissemination of Traditional Japanese Budo and Bujutsu Sakura Budokan Was Established In 1989, Kingston, Pa 18704. What is a Traditional Martial Art? Traditional martial arts are quite different than the ‘Modern eclectic forms” of sport karate or MMA that have become popularized today. The emphasis in Traditional budo is placed on studying combat tested techniques that were developed by actual warriors of days gone by. The traditions and techniques of the founders of the arts are preserved. Unlike “Modern eclectic forms,” where the techniques … END_OF_DOCUMENT_TOKEN_TO_BE_REPLACED